The Mursi tribe is perhaps one of the most famous and popular tribes of the Omo Valley in southern Ethiopia, Africa. The main reason for their fame is the women who wear large clay plates in their lower lip. This attracts crowds of tourists who rush here searching unique photos and videos of the “vicious savages”. 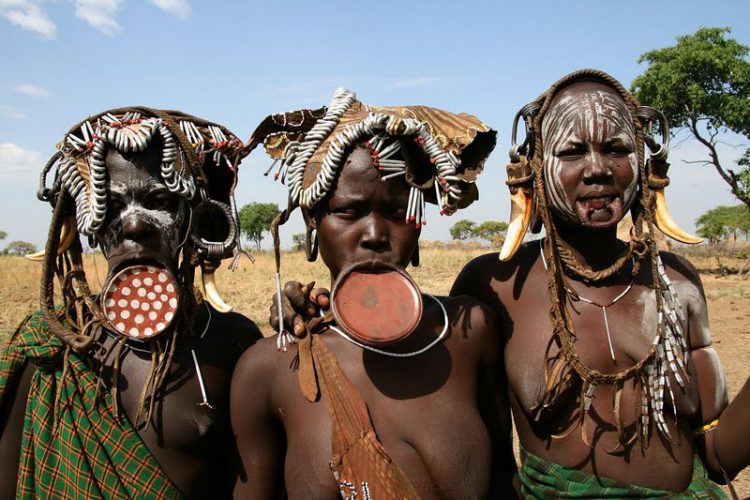 This popularity also has influenced Mursi themselves, they have become spiteful and selfish. What else could they do? Imagine that day after day strangers come to you, take pictures of you, get into your dwellings, inquire about traditions. “They come to film us as if we were monkeys in a zoo” – that is what the tribe people themselves think about it. 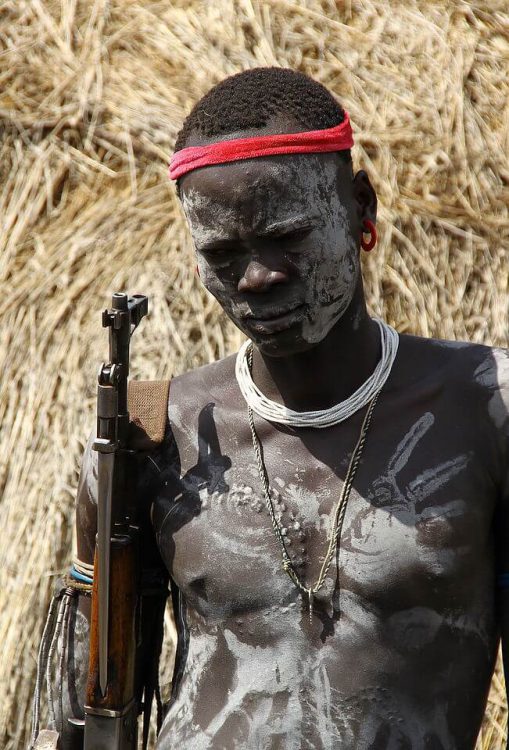 The reaction to this attitude was immediate. When tourists appear, the tribe surrounds them and tries to be as rude as possible, in addition, they all wear their best outfits and jewelry. The more flashy and unusual the Mursi are dressed, the more money will have to be paid for a photo or a video with him.

Do not forget that most of the tribe men have their own Kalashnikov rifle and it would be imprudent to refuse paying, to put it mildly. Even children beg, calling the tourist “You money” or “You birr” (birr is the local currency).

You could see the fee for the photo in the hand. 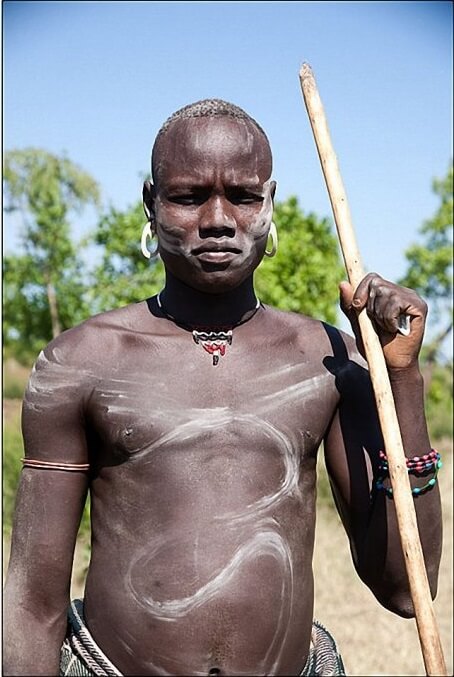 Let’s go back to the tradition of wearing clay plates. At the age of 15 or 16, a girl has an incision in her lower lip and two front teeth are knocked out so that they do not interfere with the plate, then a small plate is inserted. Over the years, the size of the plate increases and the lip is stretched. The larger the plate a woman can wear, the larger the wedding ransom will be.

Such a tradition went back to the time of the slave trade, the most beautiful and strong were taken to sale, so an inventive tribe people decided to disfigure themselves in order to stay on its native land.

The missing teeth are clearly visible. 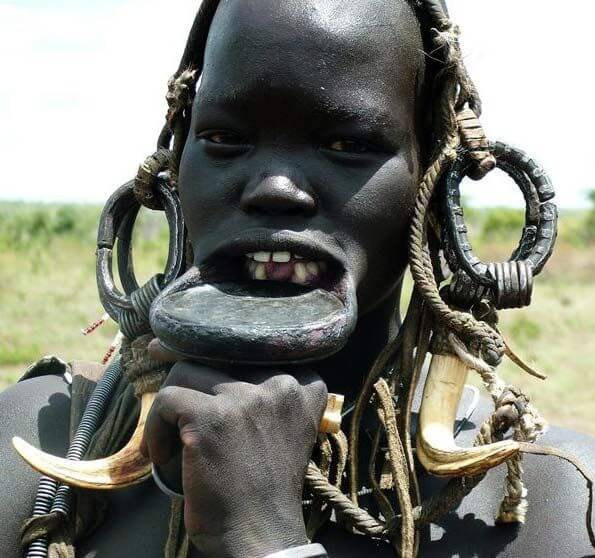 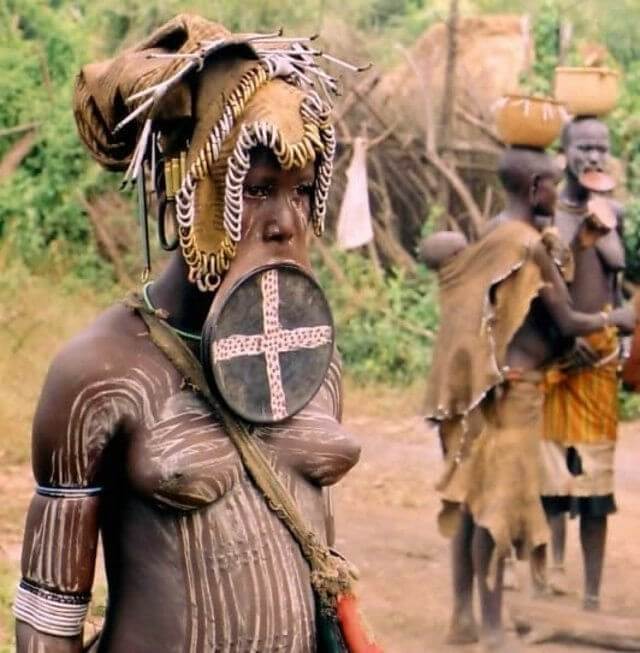 Without a plate woman is no less “attractive”. 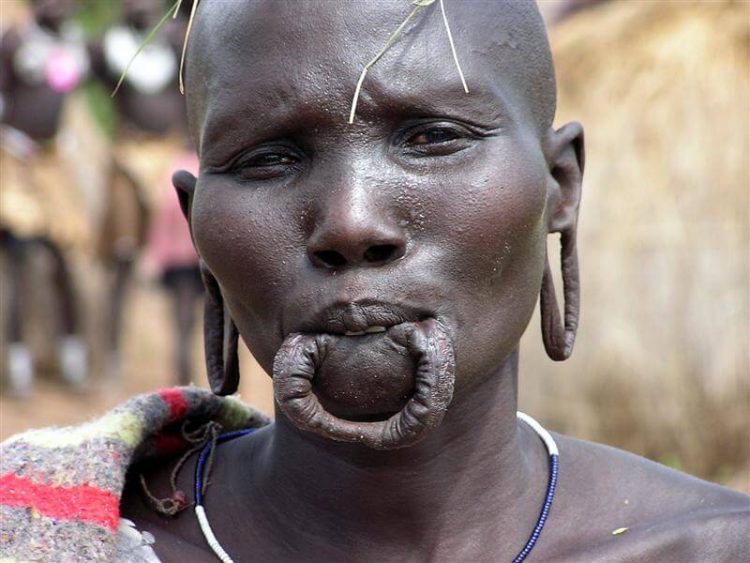 Regardless of gender, Mursi people adorn their bodies with intricate scar patterns. To create such patterns you need to resort to rather cruel methods: first, an incision is made, then either an ash or an insect larvae is placed in it. The body’s reaction to such actions is tissue capsules, which are the elements of the pattern.

Scarring on the abdomen. 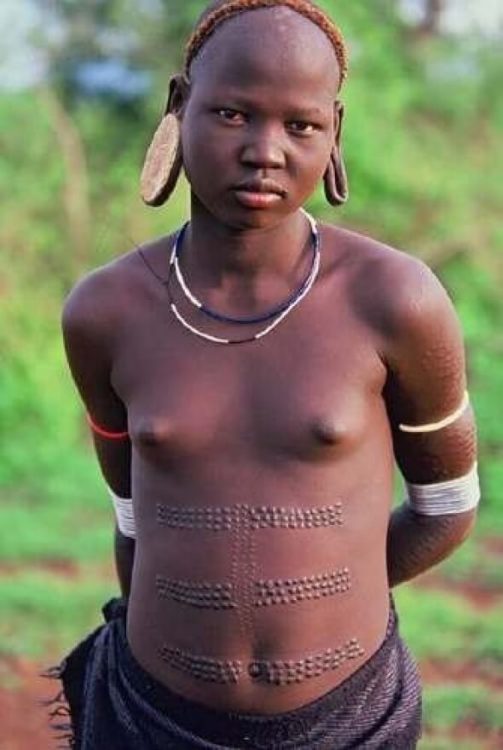 But do not make rabid and dangerous “animals” of the Mursi, which tourists who have lost their extra money on photos and videos are trying to represent them with. The tribe is just trying to survive in the new world. The world that white people created, with its cars, diseases and endless camera flashes.

One has only to drive a couple of tens of kilometers further from the nearest “tourist” settlement, make some gifts (razor blades, which are used for scarring, are very much appreciated) and just ask them to watch not shooting them with cameras as if you are on a safari.

In settlements that receive less attention, you will see that these are kind, hospitable people, perhaps with different traditions and customs, they may not wear clothes, and some customs may seem strange to us, but they are just like us. Greed and profit motives brought by the white gave birth to those Mursi, which tourists frighten each other with.

This representative of the tribe is not a Christian, he just liked the cross. 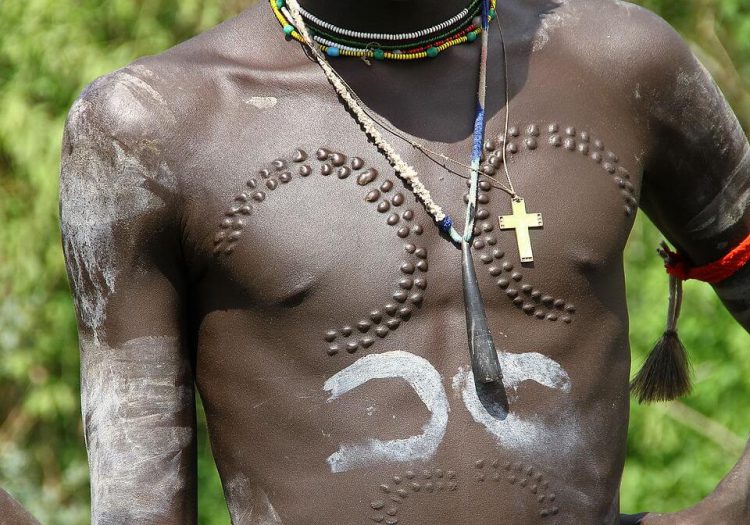