Deep in uncharted forests east from Indonesia in Papua New Guinea is still home to some 3,000 of the Korowai people, a wild tribe of former (or perhaps not) cannibals. They live with their history and past, believing in spirits, one of which must end their existence. 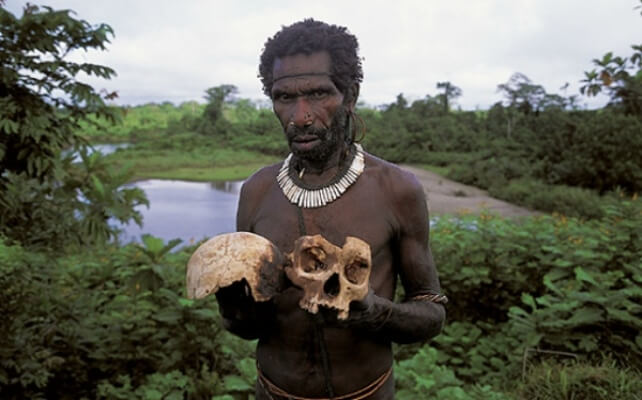 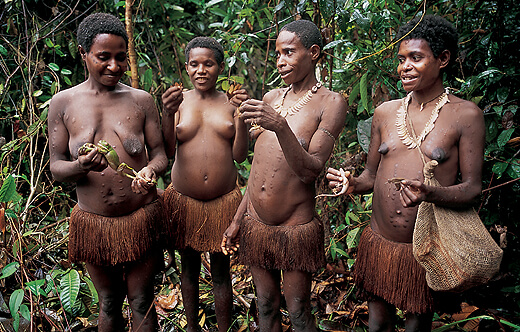 Small villages and towns surrounded tropical forests, in which the Korowai tribe lived, but they never met other people, only in the 70s the Korowai had found out the world was inhabited with others humans. In the 80s, several brave men repeatedly made their way into the jungle, and slowly made friends with the local tropical tribe and gradually began to study it.

There were times when strangers went into the woods never returned, and there were rumors about cannibals living on trees.

Falling from such a house is certain death. 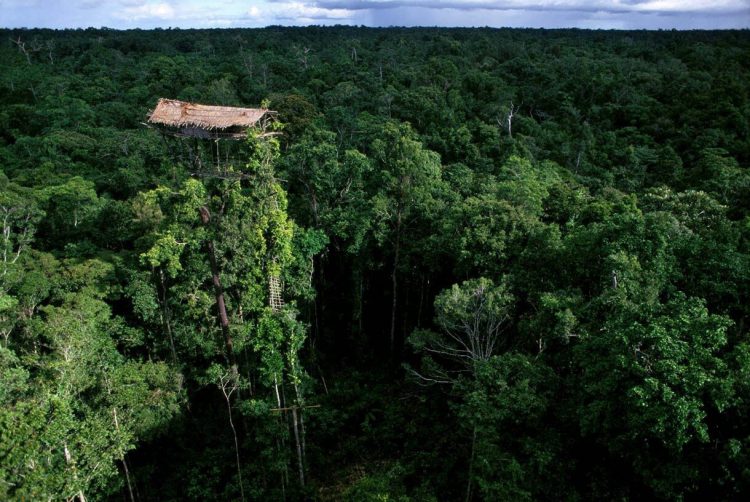 Just to go to the toilet, you need to overcome enormous difficulties. 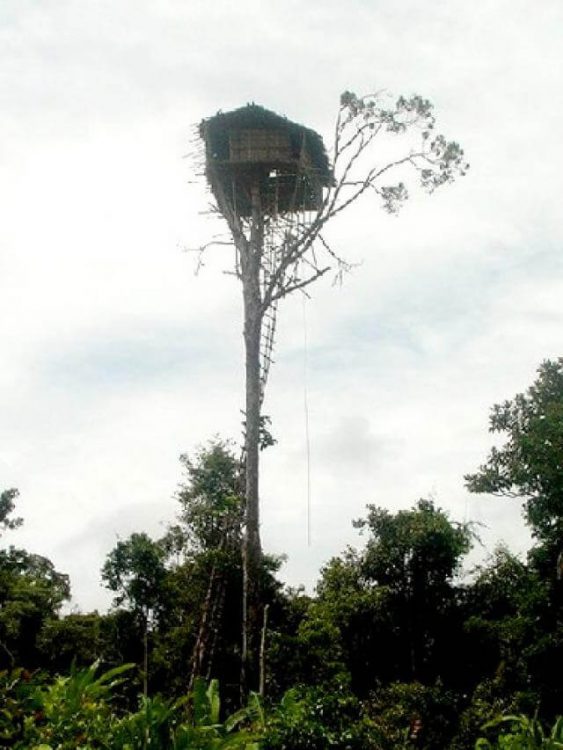 The Korowai people still live in houses built on banyan trees, the tops of which were cut off. The walls and roof are made of banyan planks and small branches. The houses are located at a height of 10-15 meters with very flimsy ladders made of branches, which is very difficult for an ordinary person to climb. All this made in order to protect themselves from predators and attacks from neighboring tribes. Another reason is the savages’ beliefs that evil spirits cannot climb to such a height.

The Korowai man in front of his house. 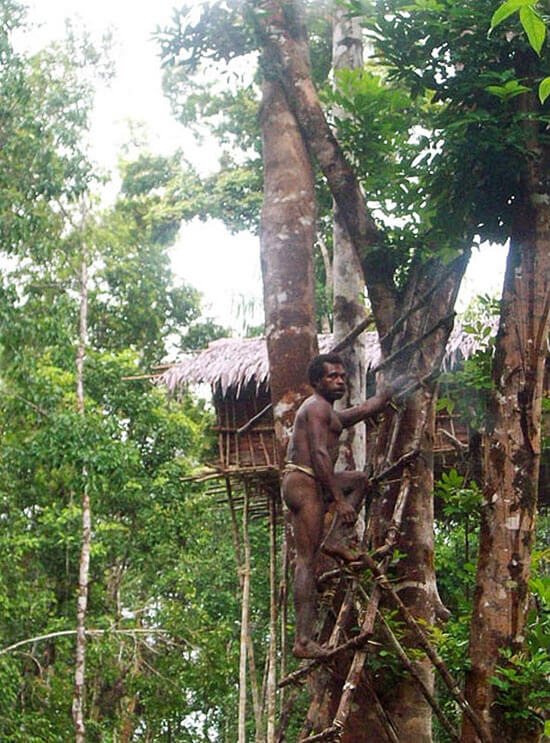 The roof is made of leaves and thin branches. 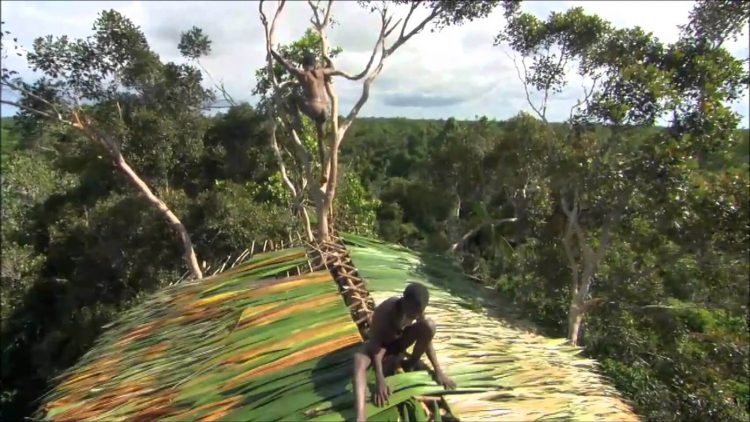 Each tree house has two hearths – one for men and one for women and children, but since polygamy is popular among the Korowai tribe, there might be much more hearths. Strangers or visitors are only allowed to sleep in the woman’s part of the house.

That is how the house looks like from the inside. 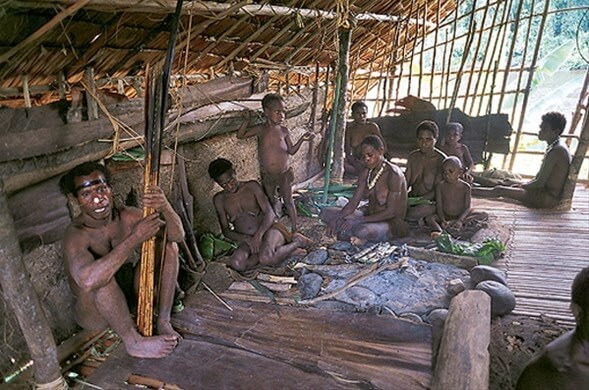 Local tribes still do not use clothes. A necklace made of beads or teeth and a loincloth for women – that is the whole wardrobe. Only for rituals and ceremonies, the natives wear special «jewelry» made of leaves, colored clay, mud and other natural elements.

With the help of stone axes, the Korowai people make nutritious flour from the trunks of the sago tree, which is the main source of food. 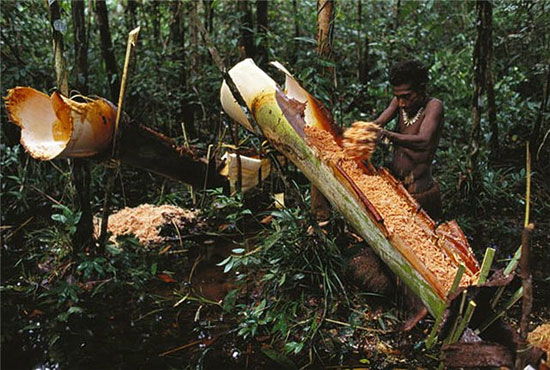 Sago grubs. A local delicacy the only source of proteins. The Korowai children eat it as a dessert. 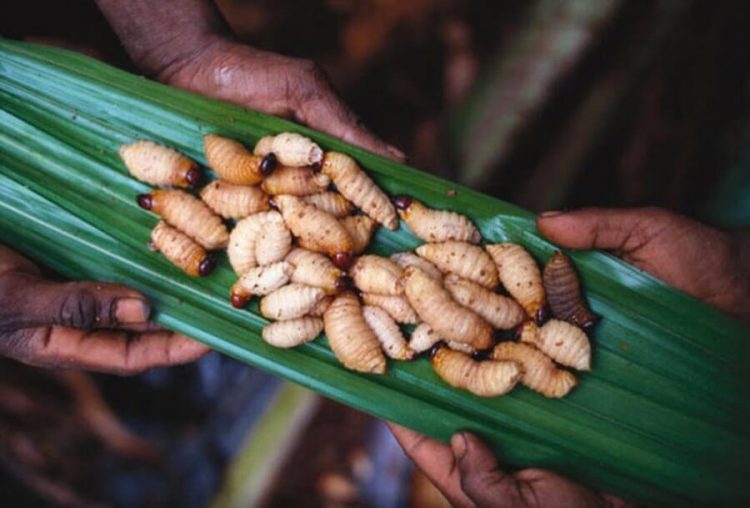 According to the Korowai tribe beliefs, the world is divided into four parts. A common world in which animals, people and ghosts live; another world that looks like the common one, but only souls live in it; a world in which the “big water” located and the giant fishes swim in it; and the last world where the sky, the sun, the stars and the moon live. All four worlds constantly interact with each other sustaining the life itself.

The Korowai people create the “foundation” of the tree house. 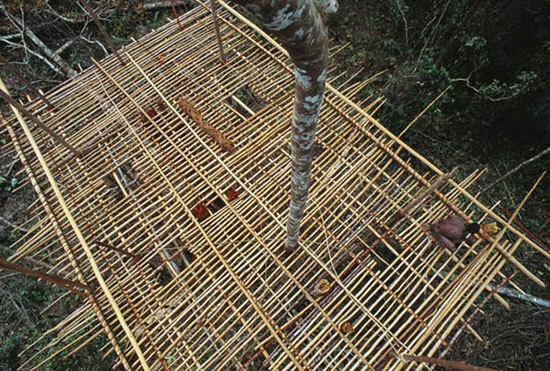 The Korowai people are often being told about those who live outside their forests, about cities and countries that they are not alone in this world. However, former cannibals are in no hurry to become part of the civilization. At first, they were afraid of any strangers because of their traditions and prejudices, only recently they began to accept some other men and the benefits of the civilization, which was brought by. 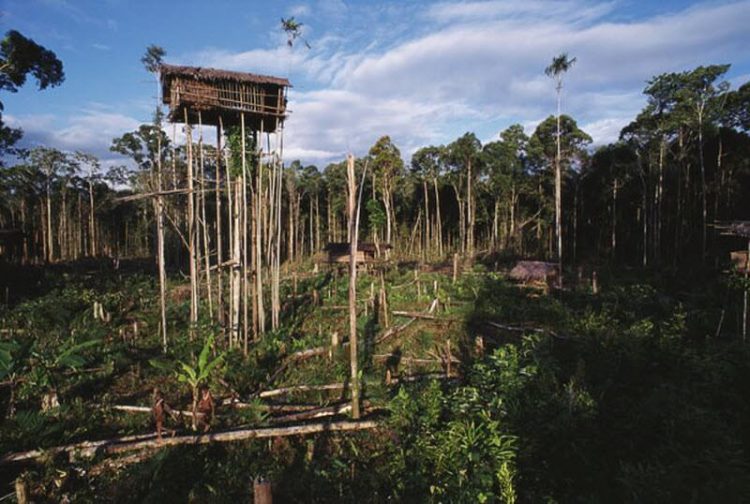